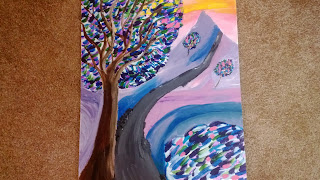 Here's the most recent painting I've done. Still needs a lot of work. A friend said not to re-do parts, but I want to do so. It's my 8th painting. The seventh one was so bad I plan on painting over it.

Talked to a friend tonight who used to belong to a radical Chicano group called The Crusade. Very interesting stuff. Often with radicals comes hypocrisy.Not that everyone in that group today is a radical, but wanting to help an abstract conglomeration rather than real people is lame. Wanting to help only a certain type of person is also lame, especially when this regards gender or socio-economic standards (ie: only helping or interacting with people who went to Harvard or some other top notch school or are well situated geographically.) Lots of support for Latino men, little support for Latinas. It's often unconscious too. I'd like to continue interviewing Latinas because we should be in the forefront, not the background. I am interviewing some women now, but want to do one more round after that and have kindly been offered a venue which could help give Latinas some more visibility. 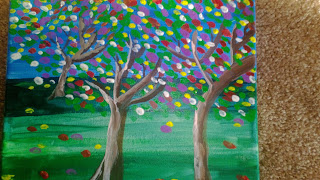 Here is the sixth painting I did in acrylics. I tried to paint the last two nights and it did not turn out well. I suppose it's similar to writing in that much of what is turned out needs to be tossed.

Posted by Sheryl at 9:49 PM No comments: 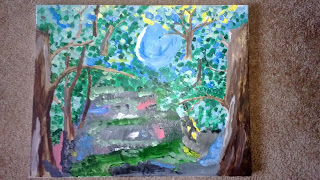 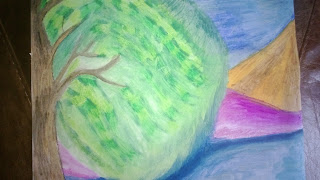 Here's some basic artwork I did at Living Arts Co-op. My beginner's trees. One is in acrylics and the other is oil pastels with q-tips and mineral spirits. I've been doing more art than writing and enjoying the art tremendously. It's a release of sorts, a way to relax and enjoy life, and it makes me feel like a kid again which is a healthy thing for the imagination.

I do have a third manuscript circulating a little bit and being looked at by a few people for errors and lack of clarity. Plus I have about 13-14 newer poems I will be working on soon! 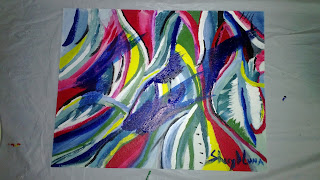 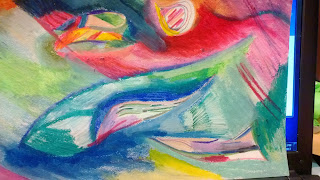 Here's some art I did at the Living Arts Co-op. The first is my second attempt at acrylic paints and the second is my attempt with oil pastels, markers and colored pencils. I enjoy doing this, but I find paint expensive. Lucky for now the Co-op has paint.
Posted by Sheryl at 5:50 PM No comments:

Sheryl
Bio: Sheryl Luna won the inaugural Andres Montoya Poetry Prize for emerging Latino/a poets, and her first collection Pity the Drowned Horses was published by University of Notre Dame Press in 2005. Her second collection, SEVEN, was published in 2013 by 3: A Taos Press. She has received fellowships at Ragdale, Yaddo and the Anderson Center. She also received the 2008 Alfredo del Moral Foundation award, funded by Sandra Cisneros. Poems have appeared in Georgia Review, Prairie Schooner, Poetry Northwest, Amherst Review and others. She is also a Canto Mundo fellow.